abstract from a dissertation on Zosimos 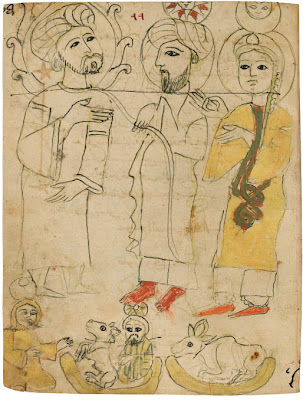 "Late antiquity has been characterized as an era when science and rational thought were in decline, eclipsed by irrational magico-religious philosophies and pseudo-sciences such as theurgy, astrology, and alchemy. I argue that new paradigms are needed in the study of religion that go beyond these stereotypes and more accurately reflect the perspectives of the practitioners, using as a case study Zosimus of Panopolis, who incorporates Hermetic and "gnostic" ideas into his alchemical theory and practice and is considered the founder of religious alchemy. I examine the nexus of science, religion, and magic in his work and in the broader context of Greco-Roman culture, and analyze how these epistemologies are configured in light of ancient views of "nature" and what is "natural."

My theoretical approach builds upon the work of Bruno Latour, Stanley Tambiah and others who have exposed the ways in which scholarly analyses of science, magic, and religion often privilege modern notions of rationality and construe the viewpoints and practices of the "other" as its opposite. I argue that modern views of nature and science are frequently defined in contradistinction to "primitive" or "pre-modern" notions of cosmic sympathy---a theory of nature upon which alchemy is based---and that modern tendencies to conceptually separate nature and culture have led to several misunderstandings of Greco-Egyptian alchemy. My thesis is that conceptualizations of nature are crucial for understanding both ancient and modern delineations of science, magic, and religion; this type of analysis is also useful for interrogating modern biases and arriving at more nuanced interpretations of ancient perspectives."
Posted by Mr. Hand at 2:19 AM