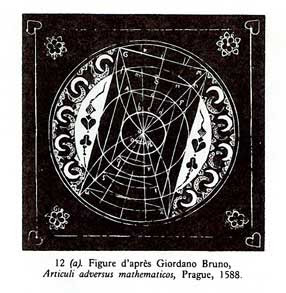 The rejection by Aristotle and his scholastic followers of the atomic theory of Leucippus and Democritus had been based upon the identification of space and body. The possibility of a vacuum in the corporeal world was denied, on the ground that discreteness was inconsistent with the continuity which was felt to be a necessary condition of space. Accordingly, the reintroduction of the atom was possible only in one of two ways—either by the distinction between body and space, or by the application of the atomic constitution of body to space itself. The former and truer solution was not open to Bruno. His time was still too much under the domination of Peripatetic thought for him to be able to take the important step of critically separating these two notions. The latter ii MATHEMATICAL ATOMISM 245

way, therefore, was that which he followed. Hence the curious attempt to remodel mathematical theory on the basis of the atom, which we have described above, and the reduction of mathematical certainty to an illusion of sense. Figure is to be found only in the combinations of atoms ; and owing to the spherical form of the atom, the infinite number of them existing in any body which is presented to sense, and the space which lies between their surfaces, mathematical equality and exactness are impossible. Neither straight line, therefore, nor perfect circle are to be found in reality. Mathematics, which should be based upon, or which presupposes, continuity, is confounded with physics, which presupposes the analysis of body into discrete, impenetrable atoms. Physical atomism finds its justification in the experienced fact of resistance, which is the primary quality of body as perceived by our senses. In mathematical space, on the other hand, we abstract from all qualities except that of dimension only. Resistance would be inexplicable were it possible to proceed ad infinitum in dividing matter; it implies an ultimate irreducible and indestructible unit, whether we regard this unit as a centre of force or as an inert substance merely.

The same influence of Aristotelian thought led Bruno to posit a subtle matter, the Ether, as filling up the interstices between the atoms. Space and body having been identified, it was seen that a vacuum was inconsistent with the nature of things. The Aristotelian plenum was reintroduced in this form, that there might be some reality where the discrete atoms were not. The bolder step of asserting the fact, and indeed, the necessity of a vacuum as a presupposition of knowledge of the material world, was not taken until there appeared the work of Gassendi, by whom the final blow was given to the old conception of body and space, and through whom the critical separation of the one from the other was first rendered possible. It is curious that Bruno did not think of applying to the continuous ether any geometrical measure; had he done so, he would have understood the value of the new theory of infinitesimals and irrationals which he opposed so strongly. Again, had he carried out more fully the distinction which he draws between the atom and the terminus or limit, the same result would have followed. Pure geometry is the geometry of the limit; for the limit is not only between atom and atom, or body and body, but also between atom and vacuum or ether. In this sense it is both continuous and figured, the compatibility of which qualities Bruno had denied ; the continuous is measured, not by making it discrete, but by making the number, the measure, fluid or continuous.

Lasswitz has shown that there are in Bruno's theory three distinct aspects, not, however, clearly separated one from another, of the atomic hypothesis: they may be named severally the metaphysical, the physical, and the Meu- critical aspects. From the metaphysical point of view atomUm. the atom is the ultimately simple, indeterminate substance of things; its conception results from the effort to find the real substance which is outside of, and unaffected by, the change and decay apparent on the surface of things, but felt to be unreal. Simplicity, unity, substance, is that which is sought, an abiding somewhat underlying the flux of the universe, which is regarded as an illusory appearance to sense. From this aspect it is that the identity of minimum and maximum, of the least with the greatest, is to be explained. Number, plurality, and diversity no longer apply to the absolutely simple: all are determinations of human and ii PHYSICAL ATOMISM 247

finite origin which are here no longer valid. In the simple all contraries coincide, for the very reason that it has no determinations in itself; even the highest qualities which men would attribute to God, for example, —justice and goodness, — are improperly predicated of him, for as in him the greatest and the least coincide, so do goodness and evil and all other contrary qualities. In this respect Bruno was following closely in the footsteps of Nicolaus of Cusa.

From the second point of view, that of physical Physical

atomism, the atom is nothing more than a hypothesis to explain the constitution and qualities of nature as we experience it. We seek to account for the differences in material bodies and in their ways of acting upon one another by the interaction of ultimate elements of which the nature and laws may be variously interpreted. Of this point of view also there are traces in Bruno, although for it he had least regard. He does not attempt, for example, to apply the theory of the atoms to explain the four elements which had come down from Aristotle. He leaves them practically intact, and we have seen that they form a standing difficulty in the way of a consistent theory. The earth alone is atomic in its nature; water, air, and fire seem alike fluid and continuous in quality, but wherein their difference from one another consists he was unable, or did not care, to make clear. Perhaps, if we take his view at its best, we should say that all three represent strata, varying in density, of the one fluid and all-pervading ether. Had he worked out this conception, which was evidently present, on occasions, to his mind, he would have given an example of what is meant by physical atomism. But this was left for another century to fulfil. From the third or critical point of view, which inquires into the Atomtsm. presuppositions or the possibility of knowledge, Bruno may be regarded as being, to some extent, a forerunner of Kant, in the stress he lays upon the relation of the minimum to measure or knowledge, and in his doctrine of the relativity of the conception of the minimum. The minimum, instead of a last of division, becomes a first of composition—a ground which we must necessarily assume in order to account for the experienced fact of composition. To know a composite is to measure it, and measurement implies the minimum or first part, without which quantity in any form cannot be explained. As the comparison of numbers with one another, their determination as greater or less, is only possible on the assumption of a unit, a common measure to which each may be referred, so the comparison of bodies with one another, as to quantity and quality alike, demands a corporeal minimum, to which their differences must be reduced. This relation to knowledge carries with it the relativity of the minimum according to the subjectmatter with which the knower is for the time being concerned. If all knowledge is of the same type, then in each application of it—each subdivision of knowledge as a whole—there is presupposed the corresponding minimum. That which is least in one sphere may be greatest in another; that which is element of one science may be that which another seeks to analyse into lesser constituents. The celestial body, which is a highly complex combination of elements, may be the unit of astronomical science. The phrase, which is the unit of the rhetorician, is analysed by the logician and the grammarian into terms and words; these are analysed by another science into syllables and letters; these by the mathematician into lines and points. Thus every science has its own (relative) minimum. 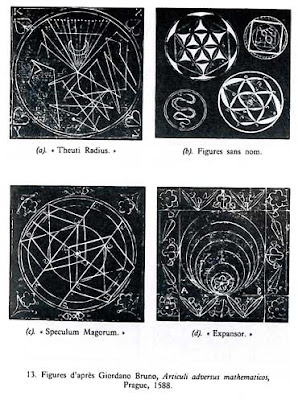 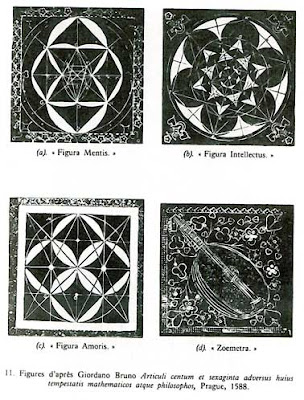 "Bruno's issues with mathematics led him to a certain set of obstacles and dilemmas that inspired him to create a new kind of a mathematics, a mathesis." -Arielle Saiber, Giordano Bruno and the Geometry of Language