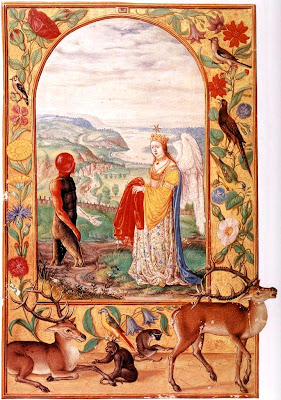 "One would suppose that the alchemist, having prepared gold, would be satisfied, but a fourth step is indicated: Melanosis, leukosis, xanthosis, iosis. In this last step iosis we have to take refuge in all our ideas of aichemistic theory and step lightly in the maze of vague and unintelligible words. Generally whenever this stage is reached, the alchemist author announces that he will conceal nothing and then breaks forth into an ecstasy of exclamatory sentences: “Oh, natures superior to all Nature!” etc., etc. After the black, white, yellow comes “iosis” which means production of violet or purple.’ It has not been clear why the production of violet or purple should havc been considered the last and highest and best step in the transmutation process. Was this final stage so honorable because metal coloring and dyeing began in the same shop, so that the royal purple and the ios of gold made purple the highest attainment of each in brilliancy of color? The analogy is attractive but does not seem sufficient.

"Another question arises: Can it be done? Also, was the production of this highest color, higher even than the yellow of gold, only the result of a lively alchemistic imagination, or is there experimental basis for this color? Again, if this violet is possible, is gold a prerequisite for the production of the violet color, just as the alchemist believed that silver must precede gold?

It is the tincture forming in the interior [of the gold] which is the true tincture in violet, which has also been called the Ios of gold. … By operating on gold you will have the Coral of gold. … You will find a powerful body having the odor of cinnabar, of coral or minium. This great marvel, this indescribable marvel, has been named Coral of gold. … Treat by projection gold with Coral of gold, silver with gold, lead or tin with molybdocalc. Behold how he has made us rise by degrees.

"Mary the Jewess in a famous passage says:

If the two do not become one, i. e., if the volatile does not combine with the fixed, nothing will take place which is expected. If one does not whiten and the two become three, with white sulphur which whitens [nothing expected will take place]. But when one yellows, three become four, for one yellows with yellow sulphur. At the end [the climax] when one tints into violet, all things combine into Violet[!]

"This passage indicates the superstitious reverence accorded to this highest color; and the preceeding quotations show that the color, as yellow was below white. The sequence is the same in both steps."
Posted by Mr. Hand at 6:20 PM