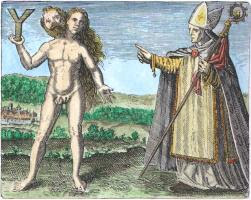 “Visualization in medieval alchemy is a relatively late phenomenon. Documents dating from the introduction of alchemy into the Latin West around 1140 up to the mid-thirteenth century are almost devoid of pictorial elements. During the next century and a half, the primary mode of representation remained linguistic and propositional; pictorial forms developed neither rapidly nor in any continuous way. This state of affairs changed in the early fifteenth century when illustrations no longer merely punctuated alchemical texts but were organized into whole series and into synthetic pictorial representations of the principles governing the discipline.”

"What the world could express only imperfectly, or not at all, the alchemist compressed into his images; and strange as they are, they often speak a more intelligible language than is found in his clumsy philosophical concepts."
Mircea Eliade, M. The Forge and the Crucible, p.223.

Often in attempting to grasp within our thought the ideas illustrated by the images or sense with our feelings the symbolic patterns that are worked into such esoteric documents, we can get lost and discouraged if we merely jump headlong into the mass of symbolism. We need some esoteric tools (in computer terms, a disassembler) to unravel the code and label some of the more obvious structural elements. Once we have an entry point into the esoteric code we can work this into meditative exercises that slowly reveal the spiritual essence woven into the allegorical emblematic structure.
-Adam McLean, Notes on the Twelve Keys of Basil Valentine

"there exists a range of deployments for alchemical emblems, showing greater or lesser reliance on pictorial representations, showing greater or lesser originality and coherence, and directed to a variety of purposes and audiences. 210
Deknamen are frequently woven into extended allegories or parables that recount the (often bizarre) transactions of a whole host of creatures. 211
the use of sexual imagery in alchemy results, paradoxically, from two opposing desires on the part of its creators: the desire to explain and the desire to conceal. 213
alchemical authors were aware of the metaphorical nature of their language and imagery
These potential ambiguities were not a drawback for alchemical purposes, but were in fact an asset given the specific needs of alchemical writers--particularly, the need for secrecy. 217
By drawing on an ever-expanding web of transumptive relationships, alchemical writers could disguise the identities of chemical substances with a host of Decknamen. 218
-Lawrence Principe, Revealing Analogies
Posted by Mr. Hand at 5:31 PM